Not for ceremonial relevance but for existential exigency, deadly nuclear weapons have to go for the world to survive. But that is practically unrealizable as abolitionists and nuclear powers travel in opposite directions in different boats.

For the abolitionists, a global treaty to make the world nuclear-free is a first step in the long-term goal of disarmament, and for possessors of this ultimate weapon a war between nuclear states is not a malady of the past.

Archbishop Paul Richard Gallagher, secretary for relations with states (foreign minister) at the Vatican, which has ratified the international Treaty on the Prohibition of Nuclear Weapons (TPNW), stressed “humanity’s insistent demand for the elimination of nuclear weapons” while addressing the UN meeting on the occasion of the International Day for the Total Elimination of Nuclear Weapons on Sept. 29.Fourteen days before that, the US and the UK, two declared nuclear powers, announced the sale of nuclear-powered submarines to Australia in a riposte to the growing maritime assertiveness of China, an Asian nuclear power. The pact covers cruise missiles, artificial intelligence and other technologies and makes Australia the first non-nuclear-weapon state to possess nuclear-powered submarines.

The outcome of differences among the nuclear powers and nuclear have-nots is out in the open. No nuclear states have come forward to part with their crown jewels by ratifying the TPW, which came into force in January.

For the abolitionists, there is a strong international political narrative which rejects the use of nuclear weapons in a war. They say nuclear weapons have not been used since the 1945 Hiroshima and Nagasaki bombings, so they will not be used ever given the humanitarian catastrophe of an unprecedented kind that befell those Japanese cities.

Nuclear powers beg to differ. As long as nuclear weapons are there, they may be used again. They go to the extent of saying that an accident or a miscalculation can trigger a nuclear war. And in today’s polarized world, the risks are alarmingly high, they would say.

The world’s quest for nuclear disarmament has already lost sheen. Both the US and Russia have placed the Intermediate-Range Nuclear Forces Treaty on the backburner. The first treaty inked by the superpowers had agreed to “reduce their nuclear arsenals, eliminate an entire category of nuclear weapons, and employ extensive on-site inspections for verification.”

The blame game between the superpowers started way back in 2014 and the United States eventually withdrew from it in 2019 under the stewardship of Donald Trump. Shortly after, Russian President Vladimir Putin followed suit.Archbishop Gallagher cited two reasons that perpetuate the nuclear status quo. Firstly, the policy of deterrence which “drives the arms race and generates a dehumanizing technological environment.” This policy paralysis aggravates mistrust among nations, he observed.

Secondly, pointed out the Vatican foreign minister, in the lucrative nuclear weapon industry, the stakes are high for the superpower nations and “those states benefiting from the nuclear umbrella.”

“States must reduce military expenditures in the interest of meeting humanitarian needs and the demands of our common home,” stressed the archbishop on Sept. 29 in a video conference.

The Church’s concern with nuclear issues is not new. It came to the forefront when Pope John XXIII helped to deescalate the Cuban missile crisis and urged in Pacem in Terris in 1963 that “nuclear weapons must be banned.”

Pope Francis decried the use of nuclear arms during his trip to Nagasaki and Hiroshima in 2019.

The Church is closely engaged with Russia on an extension of the New START (Strategic Arms Reduction Treaty), which aims at nuclear arms reduction between the US and Russia. The last remaining nuclear arms control treaty between America and Russia was signed in 2010 and ceases to exist on Feb. 5, 2026.

The availability of nuclear weapons in China, India, Pakistan, Israel and North Korea and the massive size of their arsenals make other Asian states risk acceptance.

A sustained arms race is seen as progress in Asia fueled by regional competition. Besides the proliferation of conventional nuclear ballistic missiles, several Asian states are opting for hypersonic boost-glide vehicle and cruise-missile technologies to beef up their nuclear arsenals. Most are in a race to possess diverse nuclear systems across different platforms to hoodwink an adversary’s targeting options.

Nuclear Asia includes the infamous Indo-Pakistan rivalry, Sino-Russian competition, North Korea’s troubled ties with Japan and South Korea and Israel’s tiff with unpredictable neighboring Arab nations. Above all, there is the nuclear-capable air and naval power presence of the US, which has defense commitments to Japan, South Korea and Taiwan.

Many Asian nations and neutral states have condemned the new AUKUS nuclear submarine deal, using highly enriched uranium, between the US, UK and Australia, saying it could upset the strategic balance in the Asia-Pacific region and trigger a nuclear arms race.

The current military doctrines and technological choices by Asian nations, known for bilateral and regional tensions and lacking long-term strategic vision, put the thrust on nuclear capacities to lower the threat of an all-out nuclear war.

Increasing rivalry, unilateral non-compliance and the demise of arms treaties and nuclear modernization programs and new nuclear weapons have undermined the arms control process in Asia and enticed many Asian nations to flirt with horrendous new nuclear weapons and new their ways of launching them.

The views expressed in this article are those of the author and do not necessarily reflect the official editorial position of UCA News.

The Boys who said No 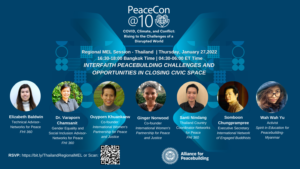 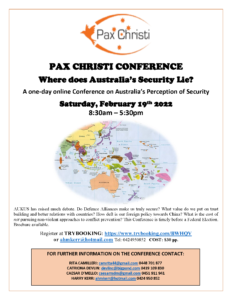 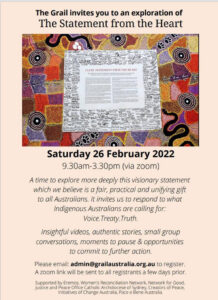 Pax Christi friends Belated Greetings for a forward looking, creative and positive 2022 with accelerated action on care for creation, our common home, and care for one another especially the poor and marginalised. I’m forwarding[...]
View Calendar
Add